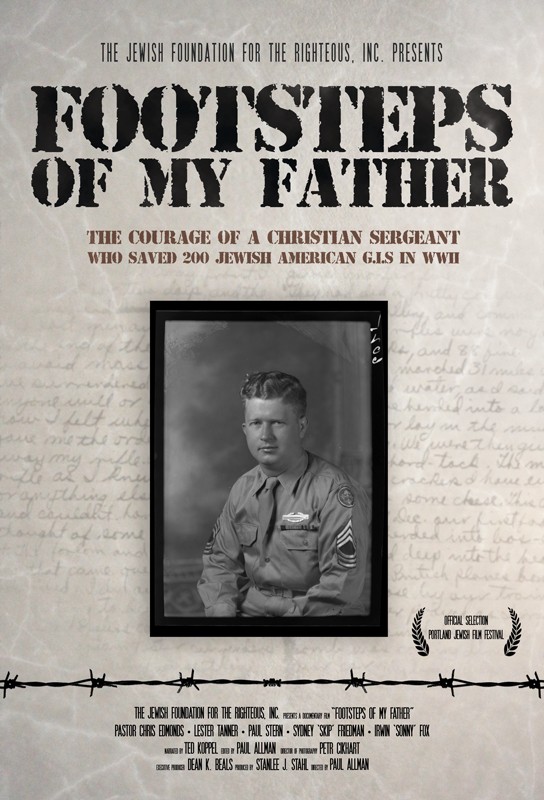 Veterans Day, November 11 at the Katie & Irwin Kahn JCC at 7:00 pm Pastor Chris Edmonds, the son of WWII hero Master Sergeant Roddie Edmonds, and Stanlee Stahl, Executive Vice President of the Jewish Foundation for the Righteous, will introduce Footsteps of My Father. Following the film, Edmonds will provide more intimate details of his father’s courage and bravery, saving the lives of more than 200 Jewish American soldiers in a POW camp in Germany in 1945. Stanlee Stahl will discuss her work at the JFR and its role in funding Footsteps of My Father. Pastor Edmonds serves as Senior Pastor of Piney Grove Baptist Church in Maryville, Tennessee and is the founder of Roddie’s Code, LLC, and The Roddie Edmonds Foundation; organizations committed to extending the legacy and leadership of Sergeant Edmonds to future generations. Pastor Edmonds is the author of NO SURRENDER: A Father, A Son, and an Extraordinary Act of Heroism That Continues to Live on Today. After the program Pastor Edmonds will be available to sign his book. This program and film are underwritten by the SC Council on the Holocaust as part of the Columbia Jewish Film Festival. There is no charge, but tickets are required. Call the JCC at (803) 787-2023 to reserve your ticket. FOOTSTEPS OF MY FATHER in PARTNERSHIP WITH THE SOUTH CAROLINA COUNCIL ON THE HOLOCAUST November 11 at 7:00 pm (38 Minutes/English) The true story of an act of extraordinary courage by Master Sergeant Roddie Edmonds, a devout Christian from Tennessee who risked his own life to save the lives of 200 Jewish G.I.s when they were prisoners of the Germans in WWII. Following the film, we will be joined by Roddie Edmonds’ son, Pastor Chris Edmonds and Stanlee Stahl, Executive Vice President of the Jewish Foundation for the Righteous for a discussion.